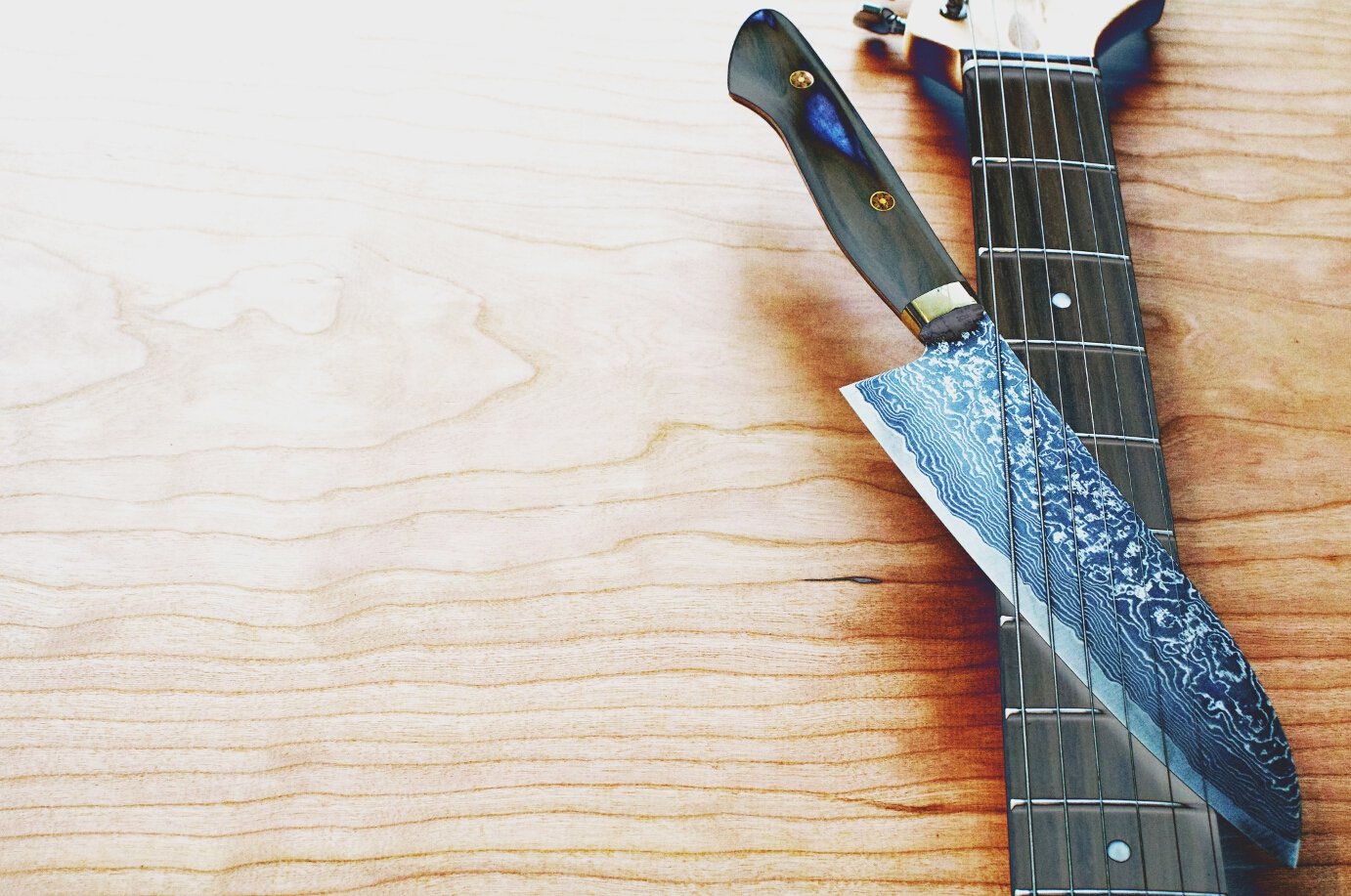 In the past 25 years there has been an explosion of interest in great cuisine created by a new generation of skilled chefs passionate and demanding of the quality of their ingredients and their tools. So, it’s no surprise that a knife culture like food culture has developed. One could say that food is the new rock ‘n’ roll, making knives the new guitars.

Given the explosion of knife culture, it is only natural that it also has its attributed hype, fashion and trends. Fashion says that some knives are greater than others, but the good/better/best marketing approach to this fundamental tool may have more to do with hype than reason. It is most certainly being driven by how a knife looks.

It is often forgotten that it is France and Germany who are responsible for the development of the two culinary knife styles that have shaped our cutlery world. During the later part of the nineteenth century Germany mechanized culinary knife production, its manufacture, and international sales infrastructure. Naturally, German cuisine had been driving the design of its big-bellied heavy knife, making it a perfect rocking “meat and potato” knife. Solingen Germany was and is still is the heart of the German knife industry and its guilds, all of who participated in the development of the German knife style.

Different from Germany, the French knife was designed and developed by an individual, Philippe Sabatier, in the 1820s. Designed for an economy of movement, his knife has a more graceful blade shape creating a more solid contact cutting edge that is balanced by a shaped handle. It was his design was in response to the large variety of raw food materials that make up arguably Europe’s most complex cuisine.

The Puy-de-Dôme department of Auvergne in central France is home to the suburb of Bellevue in Thiers the knife making capital of France. This is where Philippe Sabatier developed his knife style that France calls their own and by the 1890s other French knife makers began to copy. By as early as the 1860s Sabatier’s knife was also being copied by the German and English makers.

When Sabatier first began to sell his knives to the butchery trade the majority of his customers were illiterate so his registered brand the single letter “K” was easy to identify just his knives. This began the tradition that continues today where pretenders use a variety of names before or after the family name Sabatier. So great is Philippe Sabatier’s influence that the use of his family name confirms the French style of culinary knives in the same manner as Bandaid or Kleenex refers to the whole of a product type.

While Germany and its many knife companies sold knives to the world, France made knives for the world. Yet, there is no question that other European countries have contributed to our culinary cutlery traditions mostly by creating knives designed for specific cutlery tasks. Important contributions have been made by Spain; when it comes to cleavers for fish and meat, Spain is the most diverse and creative, in that designs change dramatically from city to city and region to region. The Scandinavian countries have advanced steel quality and blade type in their approach to filleting and field knives. England, the father of industrialization, copied everyone, refining steel and its production. In terms of design, it enhanced slicing knives for meats, which lead to their inspired approach of packaging carving sets. Italy developed extremely deep bladed knives used to cut pasta and a variety of finely designed task-specific knives for different types of cheeses, cakes and dried meats that are themselves copied by others.

Many other countries throughout the world have developed a variety of task-specific knives related to the culinary arts of their nations. Knives are made for fruits, grains, nuts, meats, and fish; there are a great many shapes and styles. Only China is known globally for a single blade shape for all of its cuisine. The Chinese cleaver (Csai/Tsai Dao) is made in a number of different blade types for a variety of different tasks. But, no matter the task of the blade or its different sizes, blade thickness, or blade depth, the iconic rectangular shape is ever present.

Japan must be recognized and respected for its completely unique approach to its nations fish butchery knife tradition. Of all nations who have developed trade knife designs specific for a class of food preparation, Japan’s expression single beveled knives are highly stylized, their manufacture is practiced at the highest level of craftsmanship.

Unfortunately, during the later half of the twentieth century western kitchens lost contact with the sense of craftsmanship and the artisan’s ability to leave behind the human touch. The Japanese have never suffered from this need to be enamored by process. They have always been interested in the inclusion of skill or artistic resonance.

All the Japanese knife makers had to do was figure out which western knife style they should emulate. This was necessary because the Japanese did not really have any culinary knife tradition. The changes in the food infrastructure of Japan after he 2nd World War and the rebuilding of the nation provided the need for such specific tools for the first time. The single beveled (Wa-bocho) fish butchery knives used far to much material and did not speak to the new post war nation. The left over idea of the Meiji Restoration supported the demand for the creation of a new tradition for the home. In the end, the K-Sabatier style blade was chosen because of the Japanese appreciation for French cuisine and their respect that this cuisine had a specific styled French knife proven to be able to process a wide variety of raw materials.

North America was the greatest beneficiary of these traditions and business energies began to converge in the professional kitchens and culinary schools of the 1980s and 90s, where the groundwork was being laid for our new rock ‘n’ roll. The result is that our rich history has been revitalized by the passions of our contemporary chef’s demand for quality, creativity, and craftsmanship in their raw materials and from the tools of their trade.

During these exciting times we all benefit. While the western knife makers set new standards in response to the demands of those committed to culinary excellence, they also acknowledge their gifted Japanese counter parts. At the same time, Japanese knife makers work towards a better understanding of the demands of western cuisine and its culinary knife needs.

hacher&krain is a knife store interested in learning from our complex cutlery history, then applying this knowledge and experience to benefit, our customers. Offering you the very best integrated cutlery options from around the world based on traditional practicality, quality of materials, craftsmanship, value, and inspiration. 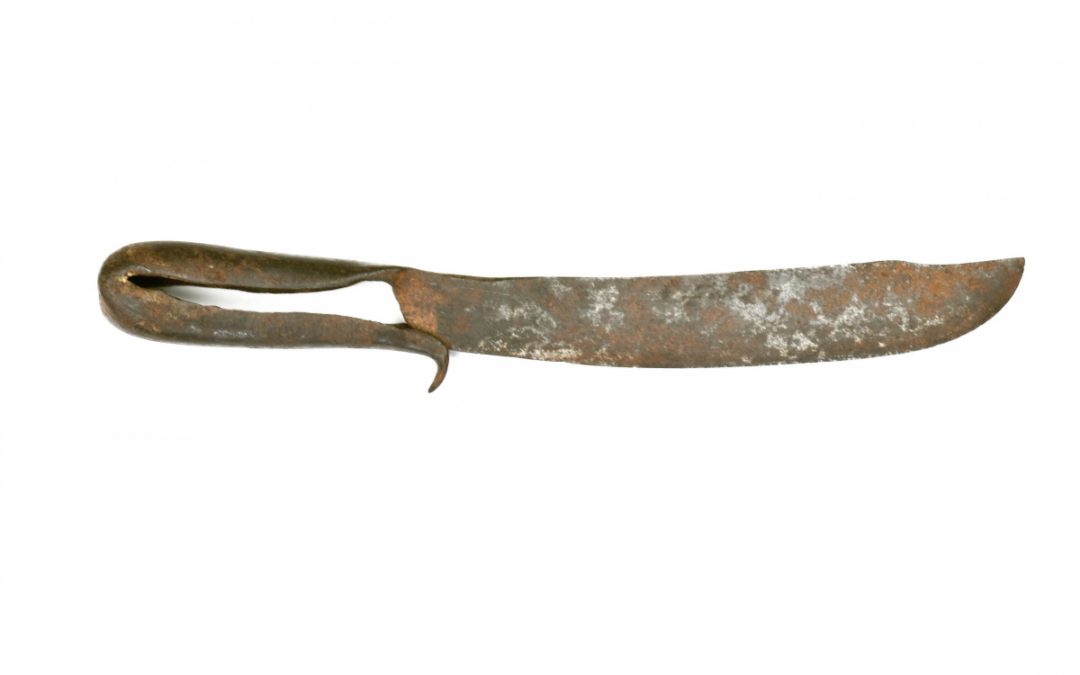 EDGE CARE  “Fill Your Bowl To The Brim, It Will Spill. Keep Sharpening Your Knife, It Will Blunt”.* 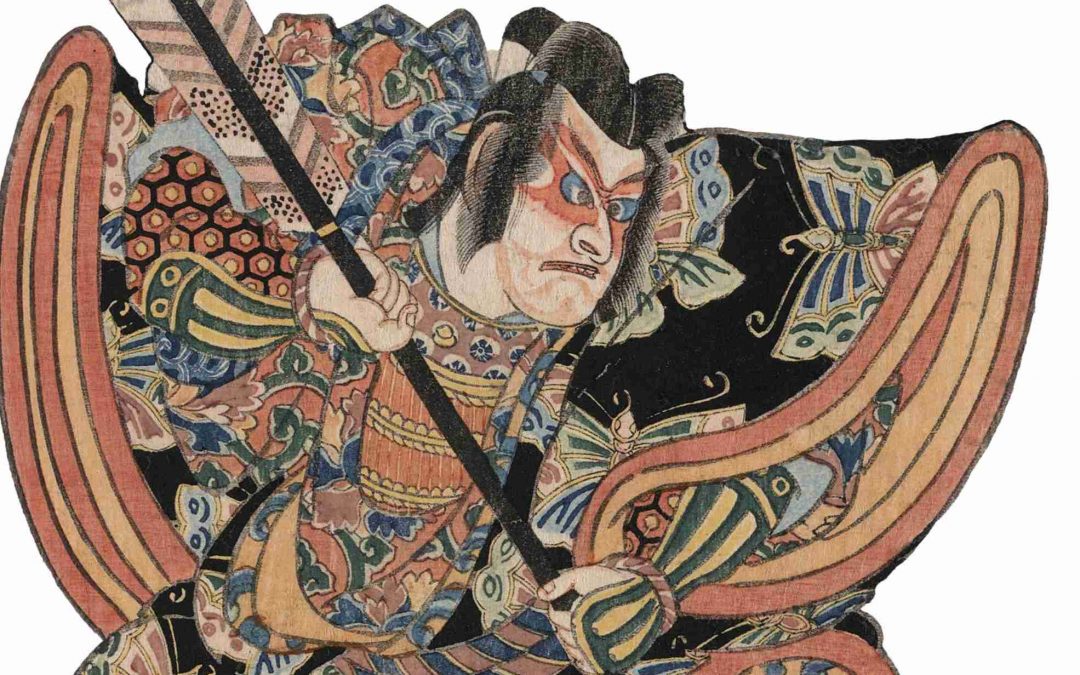 the forging of the carbon (staining steel) culinary knife consumer, part 2: YOU HAD ME AT HELLO*

part two: You Had Me At Hello” 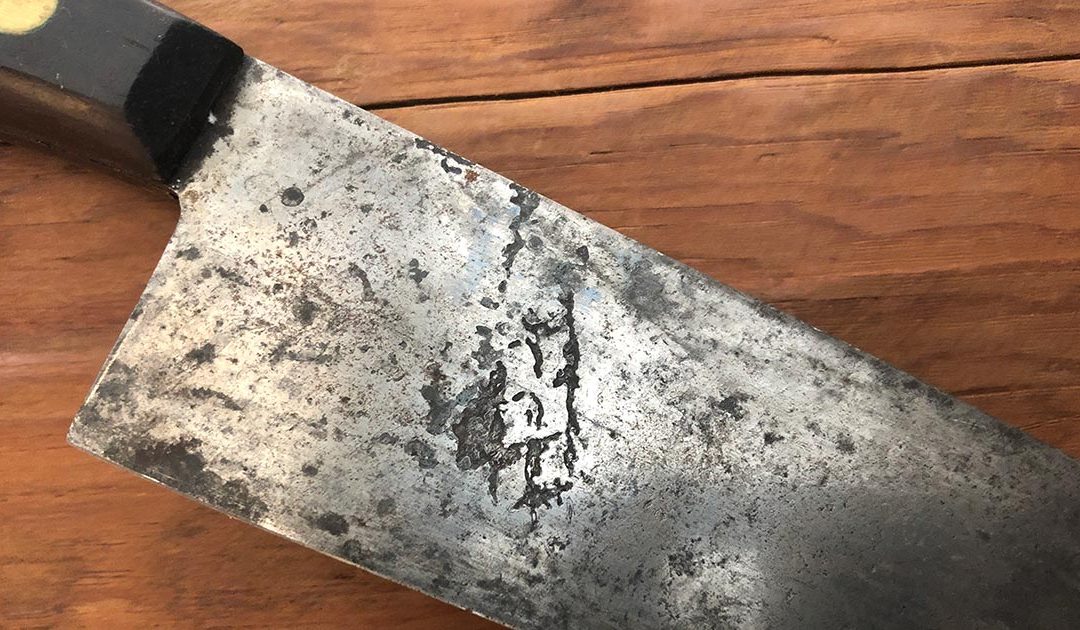 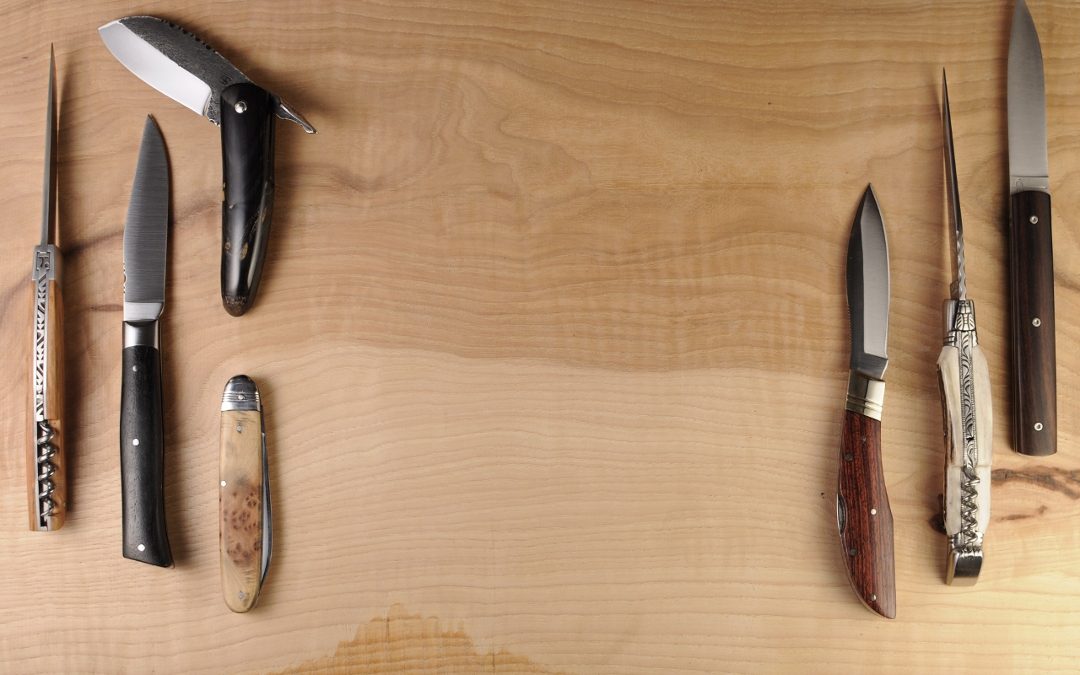 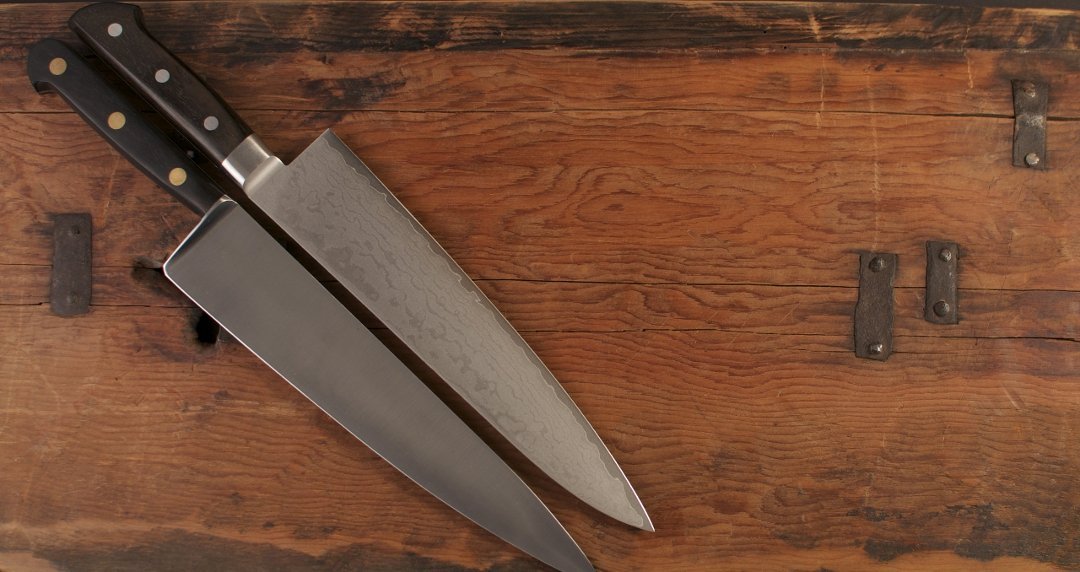