“Alexander the Great received as tribute a quantity of Wootz steel from Porus of Taxila who lost the battle of Hydaspes in 326 BC. Alexander was so impressed with the Wootz tribute he made his enemy his Satrap giving him dominion over much of the Punjab.”

“The Histories of Alexander the Great” by Quintius Curtius 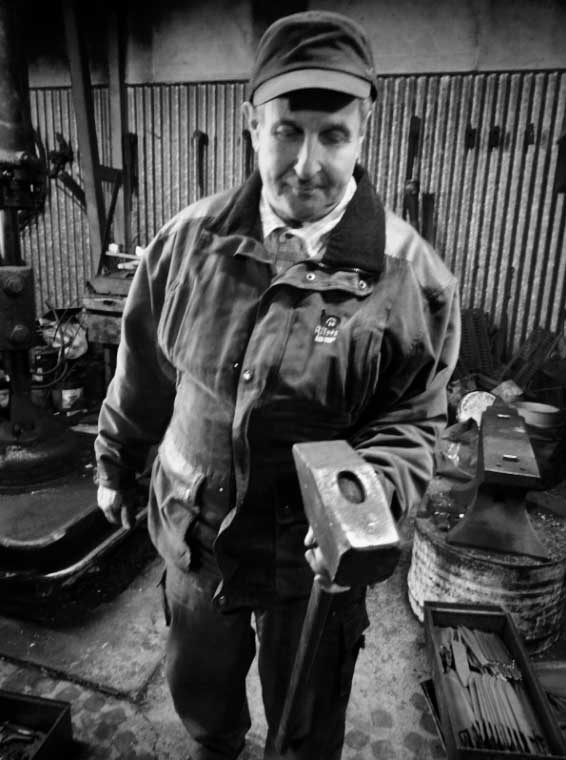 Heimo Roselli at home at his forge 2011.

Having gone to Finland to meet Heimo Roselli more than once, I found his direct and straightforward manner to be the foundation of the quality of craftsmen he is. His commitment to the knives he makes begins with his demanding standards of each raw material he chooses to use to create them. His designs are a result of his practical experience of their intended use. Each finished knife is a confirmation of his analysis of each material required and his control of the processes required to create that knife. This same focus is applied to all of his traditional Finish knives.

Heimo Roselli was never completely satisfied with the steels he could source to make his knives. It was his demanding standards that drove his eight year investigation in steel history and creation. Eight years of countless experiments and formulations to arrive at his version of WOOTZ steel known as Roselli UHC. Famous minds like Torbern Bergman and Michael Faraday attempted to recreate their versions of Wootz Steel, Heimo successed.

It took Heimo eight years to create his Ultra High Carbon carbon version of WOOTZ steel. It is exceptionally hard but flexible creating performance durability. Eight years of effort and experimentation has resulted in a finished edge whose edge retention outperforms steels in its price range and many at much higher costs. This is especially true in regard to the majority of Japanese carbon steels. After eight years he put into regular production a steel not offered for hundreds of years and remains the only consistent source of production, (his version of WOOTZ steel) available in the market today at a reasonable price.

Heimo was first a blacksmith and became a knife maker full time 45 years ago he is now in his 80’s. It is time for him to spend more time; where he loves to and with whom he loves. Therefore he has put his legacy into the hands of a new generation. While they did not create what Heimo has they have made a commitment to care for and defend his legacy and his accomplishments. Using their contemporary skills and insights to guide his rich legacy.

ROSELLI UHC/WOOTZ WHAT… A PERSONAL PERSPECTIVE
What Heimo Roselli has achieved is to put back into production a version of a material which has not been available for hundreds of years. Yet the rockwell / expert metallurgical authorities (?) claim a right to question his use of the term and to suggest that only they are competent to define what Wootz steel is?

Anyone familiar with the history of Wootz steel (1) knows that it was produced in multiple locations within Central Asia, Southern India and Sri Lanka beginning around 1500 BCe. These different locations sourced their own raw materials to make their versions of crucible steel in their regionally developed furnaces. The early Central Asian sites may have been a knowledge transfer from the most often referred to sites of origin Tamil Nadu and Sri Lanka. But this cannot be confirmed. However, what is confirmed by Anna Marie Feuerbach “recently excavated archaeological evidence indicates that the crucible steel (wootz) steel was produced for centuries by a distinct process in various locations in Central Asia.”

The fact is that each center of production contributed their versions of crucible Wootz steel (all by different names) to the overland trade routes of the ancient world. Which were replaced by ocean bound trade routes controlled by European nations from the 16th century. These imperialistic colonial interests repurposed all the original production sites they found (because they knew so much better than the locals) to produce their technologies of guns and cannon from swords and armor causing Wootz’s decline.

Why is Heimo’s work any different from all those who came before him? He found his formula to meet the goal of a material with enduring edge retention, supported by hardness and high yield. Is it that blacksmiths cannot find their way in the world of archaeometallurgy? The question is, who defined how you define Wootz? Especially when the knowledge that Wootz steel has always been made by a number of different formulas since 2009 (2). What really appears to bother these voices is that Heimo has also made a Wootz steel which meets all the performance abilities of Wootz and he has done this at a reasonable price.

What Heimo has created means everything to those who have just broken down their 3rd moose, 2nd walrus, 4th warthog, or a butcher who has used his Roselli blade all day for 8 hours every day through the week. They are all thankful they don’t need to stop and sharpen their blades at that moment, something not usual with any steel at this price. Each of these facts the author has direct experience of from those who have used their Roselli’s UHC Wootz steel knives to carry out those tasks. What other steel can claim this ability at this price?

These facts confirm that at the prices offered by Roselli he has created a material which performs within the same range of the original versions produced and treasured throughout the ancient world. A crucible carbon steel known as UKKU, BALUT, PALAN, NAMBAN or WOOTZ steel. A time long before Paul thought of a scale and Hugh and Stanley started making money from his ideas (3) . To imply that Wootz steel can be defined by a single metallurgical test created in the 20th century is arrogant. It’s like saying that all red wine is the same because it is red: with or without alcohol.

However, this never mattered to Heimo Roselli, what mattered to him was and always has been performance. This is what drove his 8 year search and resulted in Roselli UHC WOOTZ crucible steel the only contemporary ongoing production of a version of WOOTZ STEEL in the marketplace. This is the original promise of Heimo’s formula, performance at a reasonable price. This clearly has irritated some because he did it without; deep pockets, corporate might or scholarly anointment.

Clearly it is intimidating to some that a smart, diligent, stubborn and determined blacksmith from Finland took the time to figure something out that has frustrated so many for so long. Those years of smithing experience before becoming a knife maker helped him to recreate his version of a steel which suited his goals based on his study of history. He set out to make what he knew would be his formula. He set out to achieve a standard of quality and deliver to his customers a product which would meet their demands of use, at a reasonable price. He ended up with what history told him was Wootz. He never did it to make claims, he did it for his customers.

1. The Origins of Wootz Steel

2. Crucible Steel in Central Asia: Production, Use, and Origins: Ann Feuerbach A dissertation presented to the University of London in fulfillment of the requirements for the degree of Doctor of Philosophy. 2009

Heimo Roselli is also known for his outdoor or bushcrafter knives. Hacher&krain sells a selection of these at our brick and mortar shop but not online. Our online focus is culinary. Canada’s best online resource for Roselli Outdoor and Bush crafting knives is:
https://www.bushcraftcanada.com/products/category.cfm?category=53

Paul and his team are very knowledgeable and helpful.